Choosing Drivers allows players to select a team, a driver, and “level them up” by competing in events and earning experience points (XP). This will give a deeper integration and freedom for players to experience the game, keep their favorite drivers, choose how and when to level them up, and still earn cars for their in-game collection.

Tuning and Drivers replace Upgrades. In 8.5, Tuning will be available in Special Events such as Race Days. Similar to the way you are used to playing, players will need a set amount of car power (or PR) in order to complete the event. This includes your Tuning and Driver stats. Levelling up your Driver will reduce the amount of Tuning needed for events. 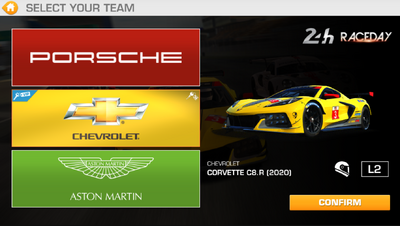 Cars using Tuning can be used in multiple Special Events. For example, players can choose the same Formula E car they used in the 8.5 Berlin e-Prix in the 8.6 Formula E event that will be coming soon. An additional Endurance event will also be coming in 8.6 for your Le Mans collection. 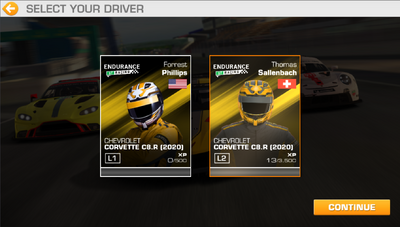 Players choose a driver once they have selected a car. 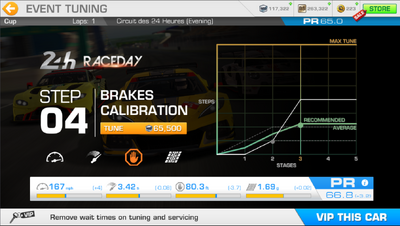 There are 4 tuning categories:

Each category corresponds to a Car Stat 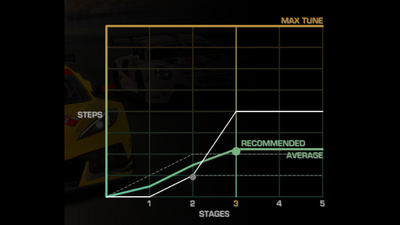 When you tune your car, you will see a graph. The graph represents the current state of the player's tuning and some other information.
The lines show:


All four Power Tunes contribute to the average. If a player were to tune each stat in a stepwise fashion, one at a time, you would get a balanced tune. However, players need not tune in this way. Instead, players can change the balance of car performance for each Special Event.

For example, for Le Mans, tuning the Gearbox over the other features increases the car’s Top Speed to take advantage of the straights. As always though, overall performance is a balance of all factors. This choice overweights top speed, but braking is underweighted, so the overall balance and average might end up lower.

Choose a driver and get behind the wheel of a Motorsports car, then improve their abilities as you drive - a new way to permanently boost your car’s performance. 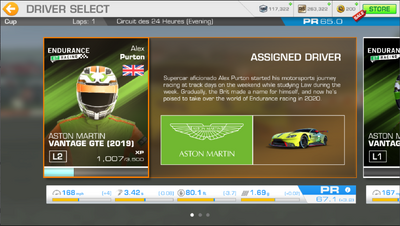 When entering a Special Event that uses the new car power system, players choose a driver for the car they select

Levelling up the Driver

Once the driver has enough XP to reach the level threshold, the driver can be Levelled Up

Retrieved from "https://rr3.fandom.com/wiki/Tuning_Drivers_and_XP?oldid=658583"
Community content is available under CC-BY-SA unless otherwise noted.